Check these out too!!

Movies to Watch on Netflix!

Last Shift- A rookie cops first shift in a closing police station, alone at night! She is waiting for a hazmat crew to collect biomedical evidence. Soon enough our cop, Jessica, learns that the police station is full of an evil killers spirit and his bloodthirsty followers. I kept repeating to myself that if I was in her situation, then I would of left that police station in a hurry and found another job. The police officer has a stronger will to stay then I would have! The ending was unpredictable (in my opinion) and made the story even more scary!

The Veil- I liked this movie because it tied together a true story and a cabin in the woods into a movie that was visually appealing. It was about a religious cult that commits a mass suicide in the woods and only one girl survives the ordeal. The girl later returns about 25 years later with a camera crew to look around the scene and find out a little more about what happened. 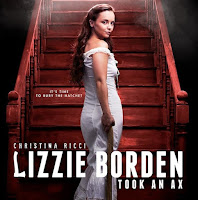 Lizzie Borden Took an Axe- A true story about a young woman that was tried and acquitted for the 1892 murders of her father and stepmother. Lizzie returns home to Fall River, Massachusetts where she lives with her father, stepmother, and sister. She finds the bloody murder scene of her parents and police take her into questioning. Evidence keeps pointing to Lizzie, the Sunday school teacher, as the prime suspect. The more the case proceeds, the more that Lizzie Borden's name is put into history...but did she murder her parents? Is it possible that this seemingly sweet woman could murder her family in cold blood with an axe?

The Unborn- It's about like any other horror movie that has came out but it does have some creepy elements, some interesting characters (a woman that survived the Holocaust, for example), and I generally thought that the idea of a twin brother who was never born haunting you is like really, really creepy! I have seen worse horror movies on Netflix, and so this is one of the more decent ones.

We are Still Here- This movie is about a couple who move to a small town after their son is killed in a car accident to try to start a new life for themselves. Little did they know that angry spirits are in the house and want to take both the couple and their dead son's souls to hell. That's not the worst part! Besides that the town that they moved to is hiding a dark secret about the house--the house demands a sacrifice every thirty years! The tension and gore in this film make it a great movie to watch and if you like films that are out of the ordinary--then this is your film!
at 7:39:00 PM