Check these out too!!

ATTENTION--- Win stuff for your dogs for FREE

I just found this awesome site and it is legit as I have checked it out thoroughly.
They are giving away pet trackers called Guardian Orbs to track your dog and you can win one for every dog in your household. I don't know about you, but when my dogs get out the door they go buck-wild. I have to chase them around and around trying to catch them and that's after I guess-timate where they went and finally find them. They have three different prizes (1st, 2nd, and 3rd place) and even if you do not win that then you can get a discount for the Guardian Orb by getting followers to share the page and use your links.

Since I was nice enough to tell you about this, then please follow my link to sign up----> https://guardian-orb.kickoffpages.com?kid=JDC29 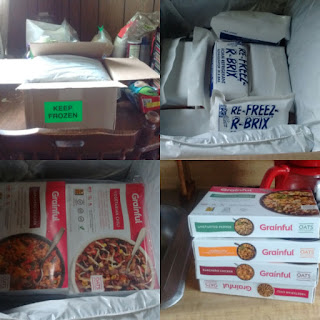 So a while back (around 2 months ago actually--oops I've been super busy) I actually got some frozen meals to review (in an attempt to be healthier). I received 4 meals from Grainful in exchange for my honest opinion. The four meals that I received are: Unstuffed Pepper, Vegetarian Chili, Jambalaya, and Ranchero Chicken. They were super easy to fix and you just had to microwave them. They arrived in great shape and a lot of care was taken in packaging (a plastic cooler was basically assembled in the box and several re-usable foam ice packs were included to keep it cold).

I actually did not like the meals as they were spicy and not my taste for food (which is a very specific taste of very little spicy). I did notice that they smelled magnificent while cooking and was super upset that my stomach wouldn't allow me to eat them. In order to give a fair and unbiased opinion I had my fiance try them.

My fiance likes healthy and spicy food {however} and he liked them. His favorite meal was the Chili Con Carne because it had "good flavor as it had nice spices in it that were not overpowering and it was surprisingly hearty for a small meal". He also likes the Stuffed Pepper as it "tasted exactly like the original stuffed pepper, but healthier". According to him, he did not really have a least favorite so that is an indicator of how good they are. The meals do have a weird texture due to them being made with oats--but that is the downside to them being healthier and they are still good.

The meals are also GMO free, have nothing artificial in them, and include 100% steel cut oats which is all a plus for someone who wants to be healthier.

I highly suggest that you check out Grainful's site and see if these are something that you would enjoy:  http://www.grainful.com/ and if you do decide to buy some, please tell them that I sent you :)